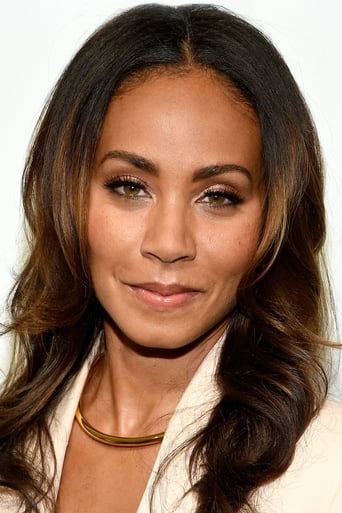 Jada Koren Pinkett Smith is an American actress, singer-songwriter, and businesswoman. She began her career in 1990, when she made a guest appearance in the short-lived sitcom True Colors. She starred in A Different World, produced by Bill Cosby, and she featured opposite Eddie Murphy in The Nutty Professor (1996). She starred in dramatic films such as Menace II Society (1993) and Set It Off (1996). She has appeared in more than 20 films in a variety of genres, including Scream 2, Ali, The Matrix Reloaded, The Matrix Revolutions, Madagascar, Madagascar: Escape 2 Africa and Madagascar 3: Europe's Most Wanted. Pinkett Smith launched her music career in 2002, when she helped create the metal band Wicked Wisdom, for which she is a singer and songwriter. Smith also created a production company, in addition to authoring a book, published in 2004. In 1997, she married rapper and actor Will Smith. They have two children, Jaden and Willow, and Pinkett Smith is stepmother to Willard "Trey" Smith III, Will's son from a previous marriage. The couple founded the Will and Jada Smith Family Foundation, a charity organization which focuses on inner-city youth and family support and has worked with non-profit organizations like YouthBuild and the Lupus Foundation of America.