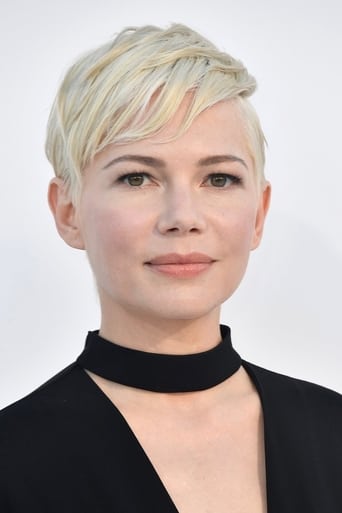 Michelle Ingrid Williams (born September 9, 1980) is an American actress. She began her career with television guest appearances, and made her feature film debut in Lassie (1994), which earned her a Youth in Film nomination. She gained wider recognition for her role as Jen Lindley on the The WB series Dawson's Creek from 1998 to 2003. Williams received critical acclaim for her role as the wife of Ennis Del Mar in Brokeback Mountain (2005), for which she won a Broadcast Film Critics Association Award and was nominated for the SAG Award, BAFTA Award, Golden Globe, and Academy Award for Best Supporting Actress. She followed this with films such as Martin Scorsese's Shutter Island (2010). Her work in Blue Valentine (2010) garnered her nominations for the Golden Globe Award and the Academy Award for Best Actress. She won a Golden Globe and an Independent Spirit Award for her portrayal of Marilyn Monroe in My Week with Marilyn (2011), which also garnered her BAFTA, SAG, and Academy Award nominations. In 2016, she received wide acclaim for her performance in the drama Manchester by the Sea, earning her nominations from the BAFTA, SAG, and Academy Award ceremonies. On Broadway, Williams appeared in a revival of the musical Cabaret in 2014 and a revival of the play Blackbird in 2016. She received a Tony Award for Best Actress in a Play nomination for the latter.