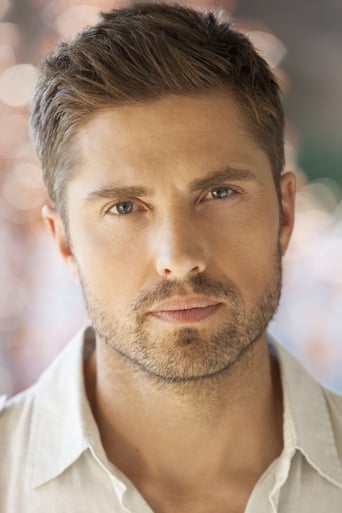 From Wikipedia, the free encyclopedia. Eric Barrett Winter (born July 17, 1976) is an American actor and former fashion model. He is also ambassador for Operation Smile. At a young age, Winter began painting imitations. After expressing his emotions through the medium of paint, he looked into another output for his talents and began acting. Before his acting roles, Winter was a male model and had some high-profile campaigns, such as one print campaign for Tommy Hilfiger. He also appeared in a television commercial ad with Britney Spears for her fragrance called "Curious". Winter is best known for playing the role of Rex Brady on the daytime soap opera Days of our Lives. He joined the show from July 8, 2002 until his final appearance on July 26, 2005. After leaving Days of our Lives, he had many small roles in television shows, such as CSI, Love, Inc., Charmed, and Just Legal. He guest-starred on ABC Family's Wildfire for five episodes. His character, R.J. Blake, a bull-rider who dated the character of Dani Davis (played by Nicole Tubiola), was killed in the episode "Heartless" which aired originally on February 28, 2007. Winter also appeared on The Parkers in the episode "The Boomerang Effect". Winter appeared in an episode of the CBS series The Ex-List, and a recurring role of Jason McCallister, the brother of Senator Robert McCallister (Rob Lowe) and love interest of Kevin Walker (Matthew Rhys) on the ABC drama Brothers & Sisters. He was a regular on the short-lived CBS series Viva Laughlin and Moonlight. Winter starred in the films Harold & Kumar Escape from Guantanamo Bay (2008) and The Ugly Truth (2009). Winter appeared in the CBS crime drama The Mentalist as FBI agent Craig O'Laughlin, the boyfriend and later fiancé of Amanda Righetti's character Grace Van Pelt. The character turned out to be a murderous operative of serial killer Red John; O'Laughlin was shot dead by Van Pelt. Winter most recently played Luke Lourd on ABC's show GCB (TV series). Winter guest starred in New Girl and appears in the Playstation 3 game Beyond: Two Souls. In 2013, Winter began starring in the Lifetime series Witches of East End as Dash Gardiner, one of the main characters. Eric Barrett Winter was born an only child in La Mirada, California. Some references cite him as Eric Barnett Winter. Son of Wayne Winter and his second wife, Gwen. He went to Los Altos High School and from there attended and graduated from UCLA with a degree in psychology. Although an only child he has an older half-brother Robert W. Winter (born 1962) from his father's first marriage to Barbara L. Worthey. Eric and his cousin Anney Tesloyn Gomez, the choreographer and singer, were brought up together during their childhood. They both appear in many small films and as cameos. Winter was married to actress Allison Christine Ford from 2001 until 2005. He dated actress Roselyn Sánchez for two years prior to their engagement on January 1, 2008 during a holiday vacation on the island of Vieques, just east of mainland Puerto Rico. The couple wed on November 29, 2008 at a historic San Juan fort in Puerto Rico. In August 2011, Sánchez announced she and Winter were expecting their first child together. Their daughter, Sebella Rose Winter, was born on January 4, 2012.