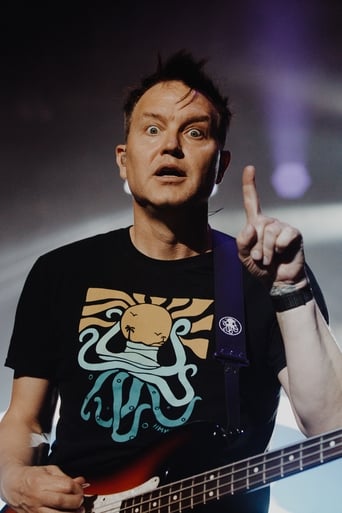 ​From Wikipedia, the free encyclopedia.   Mark Allan Hoppus (born March 15, 1972) is an American musician, record producer, and television host. He is the bass guitarist and one of the two lead vocalists of the punk rock band Blink-182 as well as the bass guitarist and lead vocalist of the alternative rock band +44. He is the co-founder of both bands. As of late, Hoppus has produced albums for groups such as Idiot Pilot, New Found Glory, The Matches, and Motion City Soundtrack. Hoppus currently hosts his own weekly television series, Hoppus on Music that premiered on September 16, 2010 on Fuse. Born in Ridgecrest, California, Hoppus spent his childhood moving back and forth between his mother and father's houses, as they divorced when he was in third grade. He became interested in skateboarding and punk rock in junior high, and received a bass guitar from his father at the age of fifteen. He played in various bands until his sister, Anne, introduced him to Tom DeLonge, who she had met while attending Rancho Bernardo High School. Hoppus and Delonge then formed Blink-182, which became one of the most popular bands of the 2000s. Blink-182 went on an indefinite hiatus in 2005, leading Hoppus to form the band +44 with fellow Blink-182 member Travis Barker. Blink-182 then announced their reformation in 2009. However, Hoppus states that he does not consider the +44 project to be "done". Description above from the Wikipedia article Mark Hoppus,  licensed under CC-BY-SA, full list of contributors on Wikipedia.