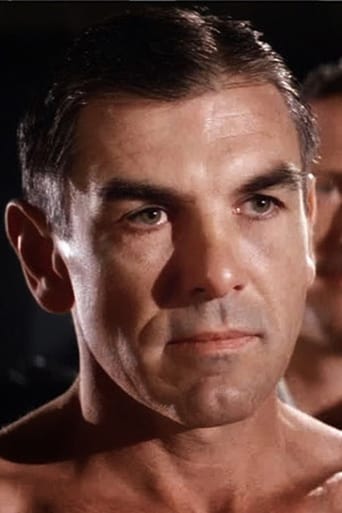 From Wikipedia, the free encyclopedia.   Nick Dimitri is a stuntman and actor best known as Charles Bronson's veteran bare-knuckle black leather coat wearing opponent in the climax of "Hard Times", often considered one of the best fights ever put on film. The 6' 2", 200 pound Dimitri was a U.S. Navy veteran and former muscleman in a Mae West Las Vegas Revue. He played many tough guy parts from the late 1950s on, joining the Stuntmen's Association in the late 1960s. In addition to fisticuffs, his speciality was dying violently on screen. He was a regular stuntman on the World War II TV series "The Rat Patrol" and a double for action actors Sean Connery and William Smith. He helped set up the great fights in "Darker Than Amber" and "Any Which Way You Can", although tough guy Smith ended up doing all his own stunts. Dimitri was also memorable playing Angie Dickinson's undead husband in the 1973 cult TV Movie "The Norliss Tapes". He later became a fixture in many of Arnold Schwarzenegger's films, stood up to Steven Seagal in "Out for Justice", and doubled for the one arm man in the big screen version of "The Fugitive". Description above from the Wikipedia article Nick Dimitri, licensed under CC-BY-SA,full list of contributors on Wikipedia.