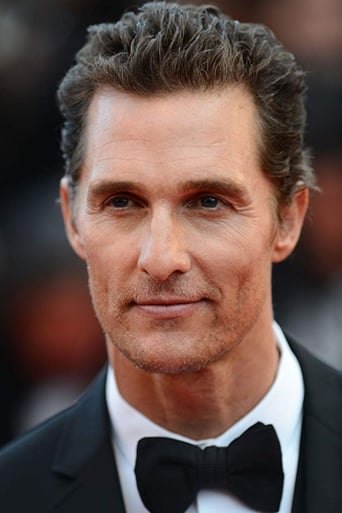 Matthew David McConaughey (born November 4, 1969) is an American actor. After a series of minor roles in the early 1990s, McConaughey gained notice for his breakout role in Dazed and Confused (1993). It was in this role that he first conceived the idea of his catch-phrase "Well alright, alright." He then appeared in films such as A Time to Kill, Contact, U-571, Tiptoes, Sahara, and We Are Marshall. McConaughey is best known more recently for his performances as a leading man in the romantic comedies The Wedding Planner, How to Lose a Guy in 10 Days, Failure to Launch, Ghosts of Girlfriends Past and Fool's Gold. Description above from the Wikipedia article Matthew McConaughey, licensed under CC-BY-SA, full list of contributors on Wikipedia.